“Why didn’t he call you back? Why doesn’t he talk to your friends? Why does he keep putting off your dates?” These questions are just a few of the questions Greg Behrednt answered in his famous book, “He’s Just Not That Into You.” The dating book when it made its debut in 2012. But here in 2020, dating seems to be complicated more than ever with virtual dates and texting etiquette.

No wonder we quickly feel ignored, left out, or second place to other things that should not take priority over a relationship. If you're looking for a relationship that will go the distance and want something more such as marriage but he's sending any signals that he is not, it's time to take heed and move on. But what are the warning signs that he's not into you?

It gets so confusing that sometimes you forget why you were ‘dating’ him in the first place--to find out whether or not he is the one whom God has for you. It’s such a significant aspect of our lives that Google searches result in 859,000,000 results in .73 seconds because we all want the white picket fence, the guy, and the 2.5 kids. The system today’s young men and women have inherited for finding and marrying a future spouse leaves a lot to be desired.

The Bible says that faith can move mountains, and nothing is proved truer than a guy who will move mountains to get the girl of his dreams. My husband did everything in his power to win me over. For an entire year, we sat next to each other in Home Economics class (schools really should bring this class back, but for you young readers, this class taught skills like sewing and cooking).

At first I didn't think he liked me because he would never look my way when he passed papers. But then he started dating one of my close friends. I found out later on, he did it just to be around me. Then the next summer after he returned from a three month-long trip to Alaska, he pulled up to the front of my house.

Scared and unsure of what I would say, he asked if I wanted to go to the movies with him. That date turned into hours talking on the phone together, picking me up for school, taking me to lunch, and eventually asking me to be exclusive.

Why am I telling you about what dating was like in the 90's? Because it still applies today, trust me. Today Chris still wants to know what I’m thinking, he still compliments me about the way I dress, he misses me when he has to travel and the list goes on.

But if you’re wondering about the guy you’re dating and you question whether he’s really into you, here are seven signs that reveal he isn’t the one for you.

Here are 7 sure-fire he's not into you: 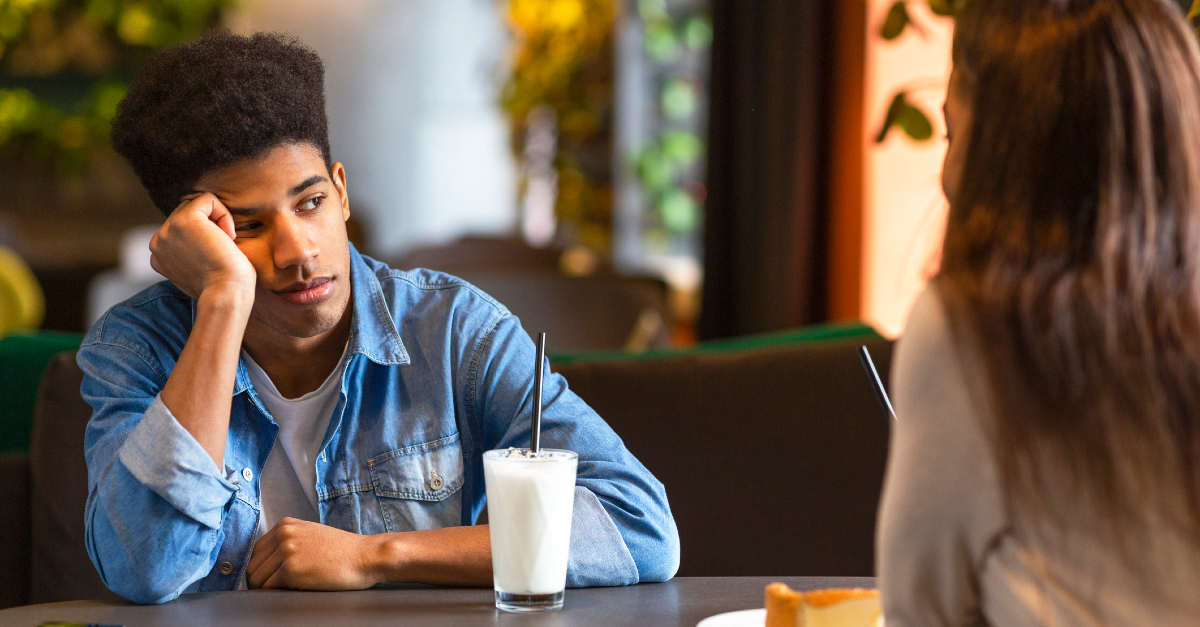 1. You Haven’t Met His Parents and You’ve Been Dating for a While

If he is really into you, he can’t wait to show you off like the treasure that you are. This includes the nerve-racking experience of meeting the parents.

If you’ve been together for a while and have yet to meet his parents, it’s obvious he isn’t serious about you. Don’t waste any more of your time before saying goodbye.

2. He Doesn't Try to Impress You

When he shows up for a date, is he on time? Early? Does he pull out all stops in order to make the date a romantic experience? Is he dressed up? Did he come up with a unique idea to spend time with you? Is he nervous?

This is how you know someone wants to be around you. Mr. Right will try to impress you and care what you think. If he acts indifferent or aloof, he’s not worth your time.

3. He Is Constantly Late and Breaking Plans at the Last Minute

Life does get crazy. Circumstances can and do change at the last minute and sometimes isolated events happen like having a last minute meeting for work or his grandma passing away.

However, if he is constantly late or breaking plans at the last minute, it shows your time isn’t valuable to him. That’s a big warning sign that you should be running for the hills.

Ever feel like you aren’t being heard? He asks you to repeat yourself, interrupts you? Do you feel like you lack his full attention? One minute he seems super interested in you and is really affectionate, and the next he’s just not.

Everyone can seem distracted now and again if they’ve got something big going on in their life taking up their headspace. If you’re together and he seems to have one eye on his phone or other women that pass by, or he’s showing more interest in the pretty waitress, he isn’t the guy for you. First off, he doesn’t respect women or have a shred of integrity which are two highly valued traits in a man.

Maybe he was interested in the beginning but his attention span has waned. For example, the first few months were pure bliss. He treated you like royalty and couldn't wait to be with you. But he suddenly doesn’t care anymore about taking you out and deep down your gut is telling you something is wrong.

While every relationship leaves the honeymoon phase of feeling love-drunk on each other, please understand he should still want to be with you and interested in what you say, feel, do, or think.

5. You Haven’t Met His Closest Friends or They Don't Know about You

Just like the parent thing, if he doesn’t invite you to go out with his friends nor has he said anything to them about you, it’s a sign he isn’t serious. At the same time, if he seems to make an effort to keep you separate from his friends and hasn’t shown any curiosity, he’s probably not planning on getting serious.

What is breadcrumbing? Maybe you’re more familiar with stashing, ghosting or being “led on.” It is when you lead someone on romantically through social media, messaging, or texting.  It means the guy is stringing you along with the help of modern technology and they aren’t actually interested.

Some people might breadcrumb deliberately to keep you hanging on, but most people aren’t entirely conscious of their behavior.

He texts you just enough to make you think he’s interested but he’s really not. Anyone who breadcrumbs, especially men are individuals insecure and struggle to be truly alone. In order to boost their ego, they like to have someone on standby until someone better comes along. Signs of breadcrumbing include:

7. He Doesn't Want to Know You Better

This is a big one. When a man is interested in you, he wants to talk to you. He wants to know what you’re thinking and feeling. He will call or text often. He is curious about you. If he isn’t acting like George Wade in the movie Two Weeks Notice, he is definitely not interested in you.

George follows Sandra around and asks her opinion about everything, when he says, “Before you came into my life I could make all kinds of decisions now I'm addicted I have to know what you think. What do you think?” Why?

Because it feels good for him to talk to you, to know how your day is going, to find out when he can be with you again. If you’re always the one texting, calling, or messaging him first, he isn’t pursuing your heart like a man of God should be.

By now, you’ve read the list and red flags are being waved like it’s Nascar. Let’s be honest, why do you want to be with someone who’s not into you? Life is sometimes a harsh reality that not someone won't be interested in you romantically. And that’s okay.

It’s better to save yourself the emotional turmoil and pain than to continue dating him. Ultimately, God gave you intuition and you should trust your instincts. If your stomach drops out of disappointment, anxiety, or confusion, it’s because most or all of your interactions have been negative in some way.

If it’s time to break it off, have the courage to face the facts and lift it up to God. Seek advice from friends and family and listen to what your might God is telling you through them. He knows your heart, he knows the plans he has for you. Remember the Bible reminds us not to be yoked to unbelievers and if marriage is meant for you, it will happen in God’s timing.

Heather Riggleman is an author, national speaker, former award-winning journalist and podcast co-host of the Moms Together Podcast. She calls Nebraska home with her three kids and a husband of 21 years. She believes Jazzercise, Jesus, and tacos can fix anything and not necessarily in that order! She is author of I Call Him By Name Bible Study, the Bold Truths Prayer Journal,  Mama Needs a Time Out, and Let’s Talk About Prayer and a contributor to several books.  Her work has been featured on Proverbs 31 Ministries, MOPS, Today's Christian Woman, and Focus On the Family. You can find her at www.heatherriggleman.com or on Facebook.

This content first appeared on Crosswalk.com and is used here with permission. To view the original visit: https://www.crosswalk.com/family/singles/signs-hes-just-not-that-into-you.html